David Dvořák has scored another huge achievement. UFC event in Brazil, in which the Czech newcomer made his debut, has shaken up the official UFC ranks and Undertaker managed to get into the top 15 fighters of his category.

Not only did David as the only Czech fighter score his first win in his debut, but he then also scored high in the flyweight ranking. After Fight Night 170, Dvořák made his way to top 15 in the category under 57 kg.

Currently, Dvořák (18-3) has 14 wins in a row. His UFC record is 1-0, though he still has 3 more fights on his contract. 15th place, which became 14th place afterwards is a significant milestone in Davids career. Therefore in his next fight, he should compete against someone higher up the ranks and in the event of his win, move up the ranks again. Dvořák gave us his thoughts in the Czech podcast called MMA Letem Světem 152.

“To be honest, they are just numbers to me. I have seen fighters fell from 30th place to 100th because of one loss. But when someone gets into top 10 UFC, that means he is really good.” said Undertaker.

After UFC event with Woodley vs Burns as the main fight, which shook up the ranks of the most prestigious MMA organisation in the world, David moved down from 14th to 15th place in the flyweight ranks. In the pre-matches, we saw Brandon Royval (11-4) who ended Tim Elliot (15-11-1) by submission. Apart from 1,18 million bonus for the fight of the night, Royval managed to place 11th in the flyweight ranks, causing fighters, including David, under 11th to move down by one place.

In the worldwide ranks of Fightmatrix, David holds 47th place in his category, even though UFC is considered to be the best fighting organisation in the world. The difference between those positions is caused not only because of the global competition but also because of the fact that flyweight is the domain of Asian fighters, fighting for example under the organisation called ONE Championship.

There was a discussion in UFC about cancelling flyweight altogether, but they added new talents into the mix and now it looks like it is here to stay. Maybe after the departure of Henry Cejuda, David Dvořák might be the one to raise the bar again in this category. 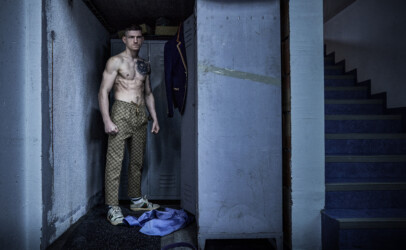 From fighter to model

For the April publication of Esquire (number 4/2020), David became a model instead of a fighter for a while. Apart from ...

David flew to Las Vegas for his next UFC fight.

David Dvořák (18-3) flew to Las Vegas on 5th September for his next UFC fight, which should take place on 19th Septemb...

Seasoned fighter Elliot took a jab at Dvořák. „I’ll destroy you!“. Is he going to be his next opponent?

Who’ll be the next to cross David’s path in the UFC? A new rival might be already in sight. Tim Elliot chall...